How to get hired at Happen to Your Career

This might come as a bit of a shocker, but we don’t always post our job openings for our company.

“I thought you were in HR for years, Scott. How could you?”

I was. I worked in many different companies and sectors. Government, Manufacturing, Fortune 500. I’ve been on all sides of the table too.

When a hiring manager has a need, they usually are doing their best to make sure they’ve got someone in mind already.

I saw with my own eyes each of those organizations also hired without posting publicly and hired outside of their “normal policies and procedures.”

Does this make them bad companies? No, I don’t think so. In fact, I think in some cases it might even make them more responsible!

But, all the situations that were “exceptions to the rule” (i.e. not posted) were either better jobs, higher paying than normal, or jobs created specifically with a person in mind.

We’re hiring for 2 contract positions right now and I thought it was a unique opportunity to share with you what really goes on behind the scenes of companies when they’re hiring.

This is a situation that managers, leaders, CEOs and other people that can hire you run into every single day!

Well here’s what I didn’t do:

I didn’t rush to put the job up on LinkedIn and Indeed.com and Glassdoor and The Muse.

Instead, I sat down with Mark, our current Partnerships Manager and asked: “Who do we know that would be great for this role?”

Now, I had already detailed out a job description and exactly what I was looking for, but I’ve found that a lot of companies won’t even do that before beginning to talk to people that might be a good fit.

We came up with a few people last week that we thought would be fantastic for the role and I’ve already had conversations with these people.

Now why would I do that?

Yes, small and medium-sized companies do this.

HR, Legal and Talent Acquisition everywhere are cringing about that statement because it’s their job to make sure that everything is going according to company policy.

Now to be clear, we’re not talking about breaking the law here, instead we’re simply talking about understanding that exceptions to processes and policies happen much more often than most people think.

If I know that they happen, then my first thought is always: “What circumstances have to be in place so that an exception can be made for me?” AND “How do I create those circumstances?”

BTW that’s one of the reasons that we often suggest targeting companies that likely are a great fit for what you want out of a career. All of the people that Mark and I thought of for our Partnerships Manager were people we already knew and had already interacted with.

Meaning, those “hidden” jobs often aren’t very far away but one of the things you need to do is “create your own circumstances” by getting to know people in those organizations that are likely a fit.

Alas, all the people I’ve talked to that I had in mind aren’t right for the roles we have open, so that’s why we’ve now gone to posting publicly yesterday.

This same phenomenon happens in lots of ways in companies. You probably see it on the job boards as a job simply disappearing without a trace 2 days after you spent 97 minutes trying to get their stupid website to load correctly without timing out so that you could finish your application.

So how can you get your foot in the door before it gets slammed closed?

Before the posting: Begin building a relationship with the companies (and people in them that can make hiring decisions) now. Not later!

One of the people who I’ve already talked to about our Partnerships position originally contacted me to ask for advice. We ended up on a phone call and she has gone out of her way to stay in contact by introducing us to people that she thought might be helpful for our business and sending us customers and readers and letting us know about it.

After the job’s posted: Separate yourself from the rest of the crowd by showing NOT telling.

We have a Career Coach position open now, but when Ann saw the same position a few months back she knew that if she just applied she would probably get lost in the mix of resumes and applications. Instead she decided she was going to show us exactly what we were looking for by demonstrating her knowledge and skills to get the job.

She first found a connection that we both had in common and had that person introduce her to me directly (much better than if she sent an email herself because it’s now coming with credibility).

Then after we scheduled her for a screening interview, she sent a package with a baseball glove for my son (yes she did the research to know that I had kids and what ages) with a note saying she was ready to “knock it out of the park.” 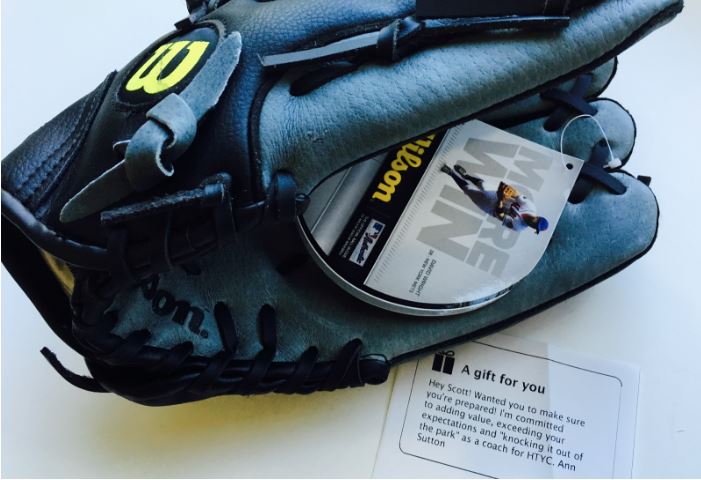 Now, please don’t go sending baseball gloves to everyone. The reason this worked so well, is that she was showing, in a way we couldn’t ignore, that she understood exactly what we needed in a career coach (someone who helps people get the jobs they want!). This caused her to stand out.

Think about this as the equivalent of a web designer creating a new mock up of an underutilized web page from the company’s site, or a business development person introducing a new customer to the biz dev team.

It’s showing and demonstrating that you know what you’re talking about in a way that’s really relevant to them.

Ann impressed us so much that even though we didn’t offer her the role, I introduced her to a friend that ended up hiring her!

You can do this too:

Don’t “just apply” any longer, begin building a relationship with the companies that you’re interested in now AND look to stand out by showing NOT telling.