Investing in Yourself: Why It’s More Expensive To Hold Off on Your Dreams 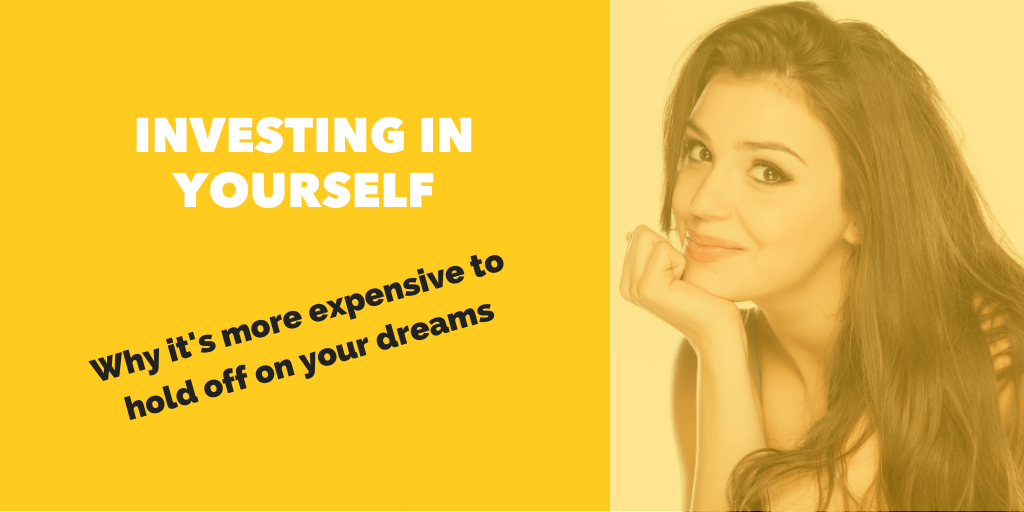 What's Stopping You From Investing in Yourself?

We had some friends over the other day for dinner and a bonfire at our house. A bottle of wine or two later the topic came up about working out.

One of our friends said she “wished she still worked out.”

The coach in me thought “Reaalllllyyyy” and although I knew where this was I likely to go, I couldn’t stop it and couldn’t turn away (train wreck style) so I dived in anyway.

“What’s stopping you from working out?” [the questions just pop out]

“Well I used to run with friends and they used to organize it and then I would show up and run. But later I became the one to organize it and that motivated me to get there to run…” she went on to explain that having other people depending on you (or showing up and expecting you) made it much easier to exercise.

Why don’t you do that now?

We went through this kind of questioning…
What about adding it on your calendar? Well, I need the other people to show up?
What about a personal trainer? Too expensive?

OK, right about here, it’s super easy to judge – but we’ve all done this.

We want something but we haven’t actually made it a priority for ourselves AND we’re deluding ourselves into believing the excuses we come up with to make ourselves feel like it’s OK (yes, the ego is a fragile thing!). Your brain will go to great lengths without your permission to make up stuff so that you feel like why you’re doing something is justified… and then your brain doesn’t even tell you.

It’s like a friend or family member that says they have your best intentions in mind, but clearly what they’ve done is selfish.

“I didn’t want to tell you I got in an accident with your truck because tomorrow is your birthday, and I didn’t want to ruin it for you.” Thanks very much, Esmeralda! I will decide whether my birthday is ruined or not, but don’t NOT tell me you wrecked my truck!

Yes. That's what you’re up against. Your brain is deciding for you based on past decisions you’ve made, experiences you’ve had, the environment you’ve been surrounded by.

So, back to my friend and her personal trainer she doesn’t have: don’t tell me there’s not enough time OR that something is too expensive.

You know what IS too expensive. Having to pay astronomical hospital bills because of health issues from not taking care of your fitness. OR not being able to spend your time the way you want to because you’re stuck in a hospital room.

Well, at least you’ll make the time to focus on your health then, right? Actually, even at that point most people still don’t.

I guarantee that I look at time and expense differently than most people.

When someone says to me that spending time developing themselves or investing in themselves it’s “too expensive,” I say, “OK, tell me why you feel it’s too expensive.”

All too often there is no plan – This seems to be true whether the person I’m speaking with makes $50K or $300K a year.

These same people often have invested into their retirement for years, adding a percentage of their money to their nest egg month after month.

We wouldn’t ever expect to have hundreds of thousands of dollars (or millions of dollars) in our investment account, without putting money into it, so why then do we expect that we will increase our earning capacity without significantly investing in ourselves.

And, yet, it’s “normal” to believe that we will increase our earning capacity simply by sitting back and accumulating years of experience.

How do you really make yourself more valuable?

Here’s another way to think about it: If you were a business, what would make you more valuable?

Here’s an example of a very simple business that my friend Jody Maberry runs. It’s just him as the business owner and an assistant (and a couple freelancers that he works with regularly).

The service that he provides is hosting, recording and producing a complete podcast for CEO types who want to have a podcast, but don’t want to know how to do any of it. They just want to show up and record without worrying about anything else.

Now, people already choose to work with Jody because he’s produced award winning and nominated podcasts with well known people in their respective industries, but it wasn’t always that way!

When Jody was starting out, he was constantly investing in himself by upgrading his skills, wisdom, relationships and systems.

He was footing the bill (himself) for plane tickets to conferences (and the actual event tickets themselves). He was investing time into building relationships with people that he wanted to get to know. He was learning about podcasting by paying for courses and investing time into producing his first podcast that he didn’t get paid to do, but instead gave him wisdom through learning, application, and feedback.

Do you think that he was complaining about it being someone else’s responsibility or not having enough time, or it being too expensive? No, of course not. He doesn’t look at it that way. By investing time, energy, mental bandwidth and, of course, money into each of those areas, Jody has turned himself (and his business) into a very very valuable asset.

Many people will read this and go, WTF bro? Jody owns a business, of course he wants to invest in himself, I don’t have a business though.

Here, let me show you actual earnings from from high school to year 6 in my career.

If you look carefully you’ll notice a massive leap from 2005 (my first year with an actual professional job) to 2013.

388% increase to be exact. Nearly 4x what I earned straight out of college. First of all, imagine what you’d do if you not just doubled, not just 3x, but took your pay now and multiplied it by 4.

Maybe a new Tesla, maybe a new boat. Maybe you’d take some amazing trips to Europe. You could fly your extended family. 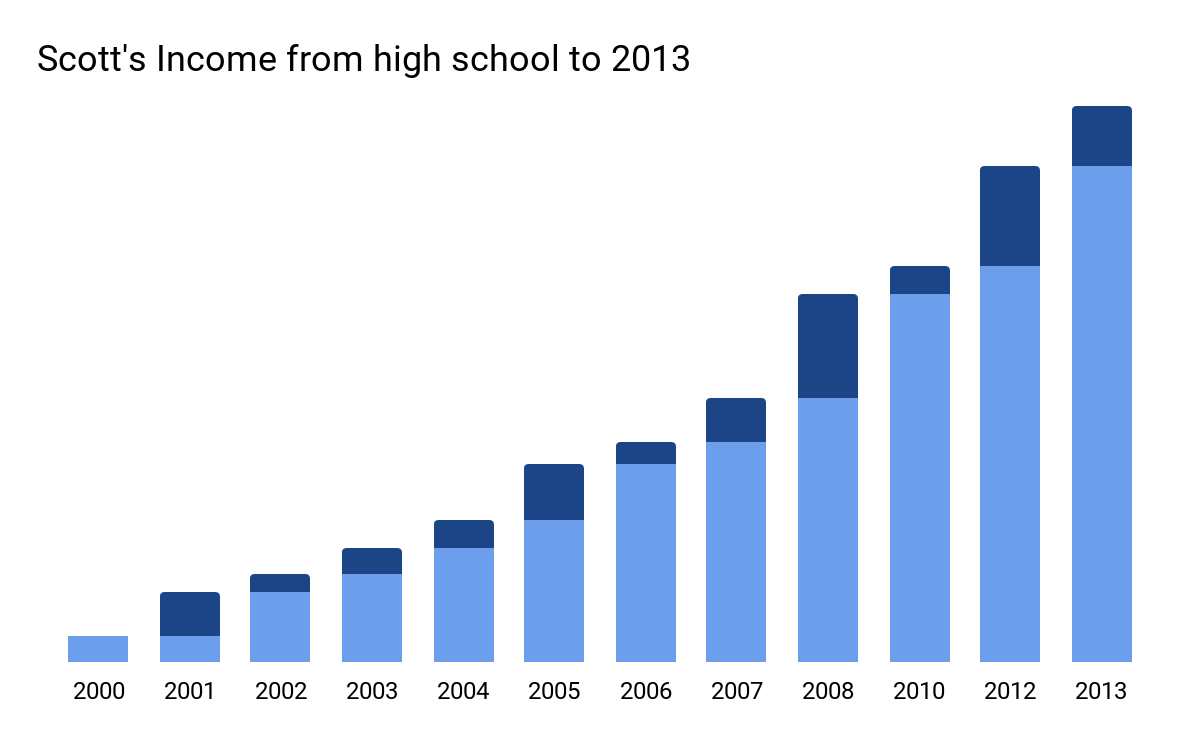 Here’s what people don’t imagine – Exactly the level of investment in yourself to 4x your worth.

For all of the years I was going to college, I wasn’t just going to college. I had a full time job part of the time. I was going to leadership and development functions constantly. I was serving on leadership roles in the fraternity (and professional fraternity) I was a part of. I started one business. It failed. I bought a franchise of another business and was spending 50 hours a week growing it from zero to 25 employees at the height of it.

One year, I spent nearly $300,000 learning how to run a business, making mistakes and improving, developing soft skills, learning how to interview, hire and fire people with integrity.

So, when people say something is too expensive for them to invest in themselves, you can understand why I think they have their priorities wrong. They’re unintentionally robbing themselves of future income (but, more importantly, the choices that come with making more money that effect quality of life) – More on that in a sec.

Currently, I use roughly 10% of my income to invest and allow my money to grow. I also invest 10% of my income into resources, books, classes, courses, relationships, coaches, trainers, mentors that are going to make me more valuable.

Here’s the thing. From what I’ve observed, when you have a combination of hard skills (like being able to work with excel or write proposals), and you develop a combination of soft skills (like being able to build relationships, negotiate, or communicate a persuasive presentation), then it’s really not outlandish to increase your salary 2x or 3x at all.

What’s stopping people is developing those areas that make themselves more valuable (by the way, this doesn’t automatically come with a degree – we’ve worked with many people that had a Masters Degree, but weren’t able to turn the degree itself into a high enough value to get them where they wanted to go – they still needed to learn how to do career change differently).

This means what’s likely in the way of anything you want is being willing to invest enough in yourself. Enough energy, learning, bandwidth, money. Enough of you to get where you want to go.

By being a psychology nerd, I’ve learned that most people are unwilling to expend effort unless they know where a path is leading.

Ironically, this is exactly the opposite of how it really works.

There are no guarantees in life. However you can through the odds significantly in your favor the more that you’re willing to invest in yourself.

If you’re not convinced yet lets show you the difference between someone who’s invested significantly in themselves vs someone who is a standard performer gets an an increase of 4.6% – 10% each year for performance increases. 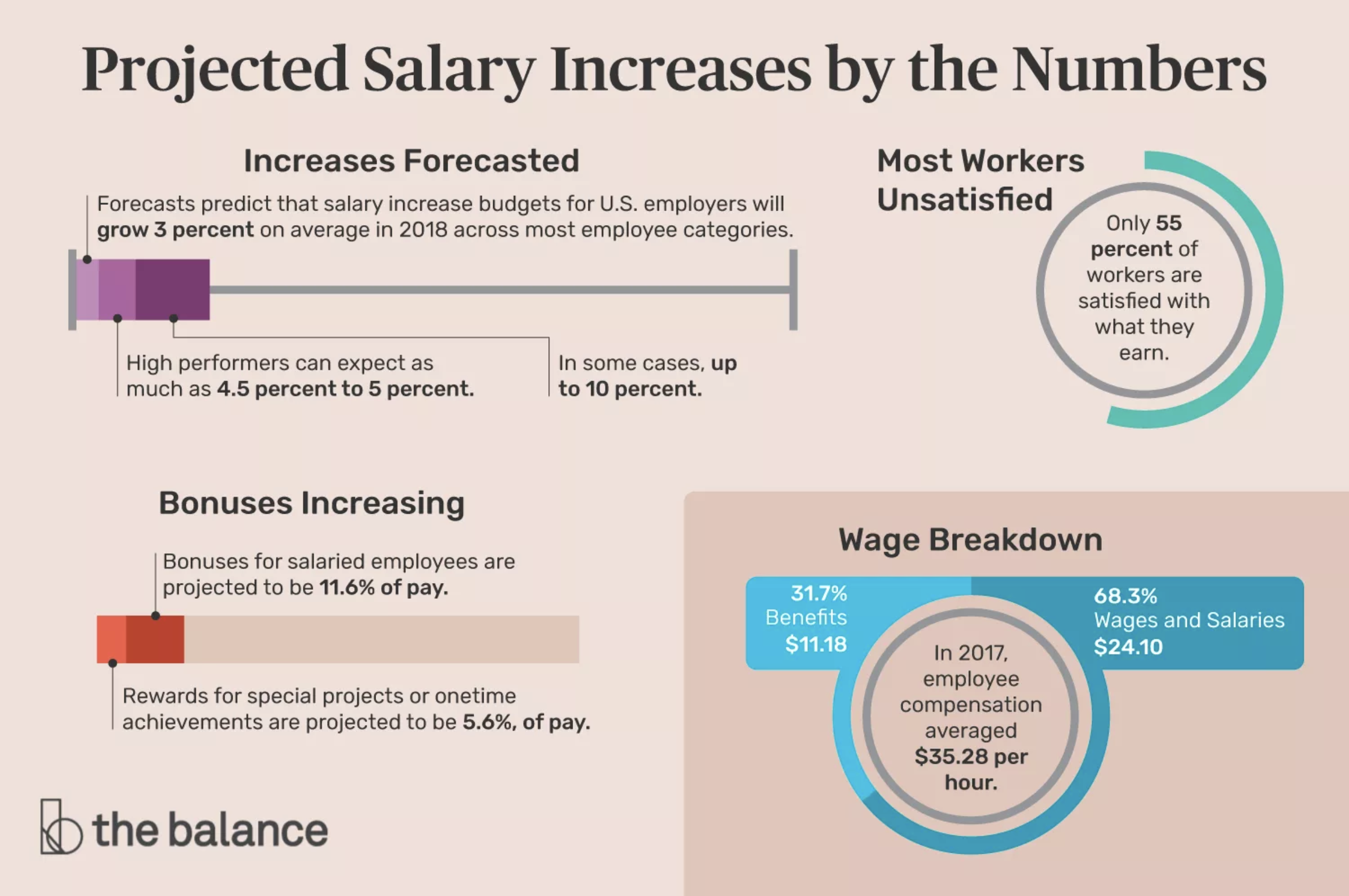 The high performer who’s invested in themselves repeatedly is someone we’ve worked with in Career Change Bootcamp (she asked us not to share her name), she’s gone from a manager role to a VP role in a relatively short time. She’s increased her salary by about 10% per year. If you’ve listened to many of our stories on the podcast, you know that this is fairly normal for people who actively invest in themselves. Versus the person who is just trucking along not investing in themselves and getting a normal increase of salary each year of 3.0%.

This doesn’t seem like a big deal, because, if you both start a $50,000 salary this is only a difference of $3500 for the self investor during that first year, but over 7 years the standard increase employee only makes $63,338 and the self investor has likely recieved several promotions on top of her raises and now makes $97,435.

This means that over just a 7 year period your missed out on ______ by not investing in yourself.

Unfortunately, very few people in the world are looking at it that way though, instead they say things like “it’s too expensive” to invest in yourself.

Well turns out, it’s WAY too expensive not to do so! To the tune of many hundreds of thousands of dollars when spread out over 20 or 30 years.

Far more importantly than than, we see that people who regularly invest in themselves have a better quality of life to go with it because they experience a greater sense of stability and control over their destiny.

I invite you to start small if you’ve never invested in yourself before.

But no matter what begin, because those people who don’t ever start to invest in themselves are left sorely on the sidelines just settling and wondering how so many opportunities, earnings and happiness has passed them by.

Want to know the very best way We Can help you?

Fill out our "Help Questions" and talk to our expert coaching team about how exactly how we can support you! Let's do this already!