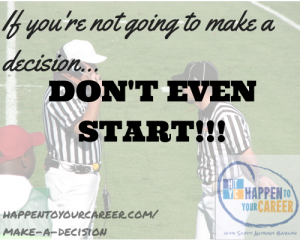 In this week's episode Scott and Mark finish off the series about determining what you want in your career and life.  The culmination of everything that they've discussed is making a decision!

This week's episode is the capstone of the free two-week intro course.

Eric Thomas says, “If you want to make a difference, make a decision!”

“If you're not going to make a decision…don't even start!”

Making a decision is scary!

Mark shares what his favorite food is…

You're going to make a decision…one way or the other!

You're more prepared than you think you are!

“Once you make a decision, the universe conspires to make it happen” -Ralph Waldo Emerson

Austin Netzley talked about the Law of Attraction when he was on the show…Mark says that this is absolutely a true principle!

. One of the things he wrote was that he would “collaborate with industry leaders…” and that was just fulfilled recently for Mark!

You just need to decide to take the next step…don't worry about 30 steps from now!

We are multi-passioned people…you don't have just one passion!

“Magic happens when you're in motion” -Richie Norton

Once you've made your list, you have to start narrowing it down.

If you haven't yet, sign up now for our free two-week email course! — but fair warning…if you're not going to do the work, don't waste the time!

What has been your biggest challenge in making a decision?

Please share this episode with your social circles and leave us a review on iTunes!!