Mini Guide: Do you really even need a resume? 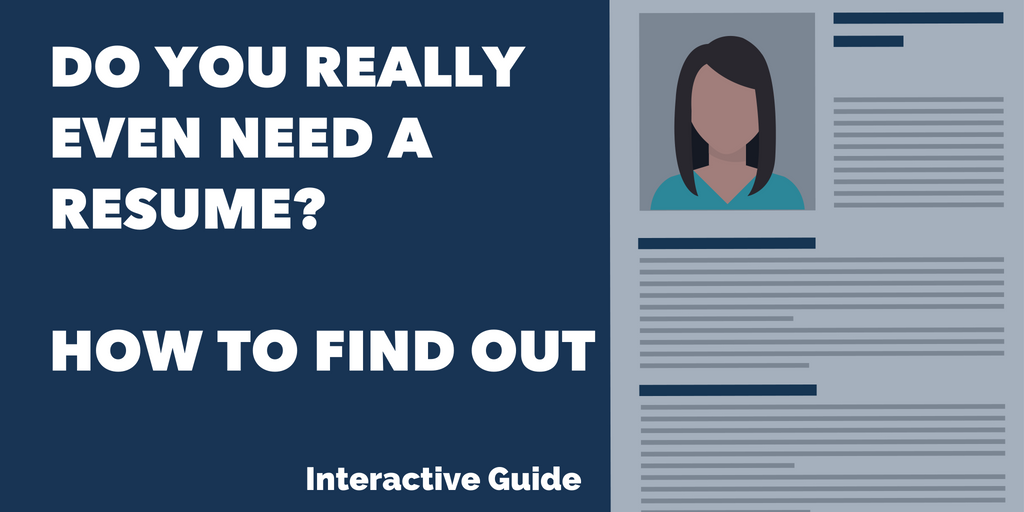 Why do you need a resume in the first place? Most people never ask this question…

They just assume the answer is obvious. But if you really evaluate the question the answers that most people give don’t really hold up.

Here are many of the answers that have been thrown my way when I’ve asked this question again and again to thousands of people over the years.

Common Answer 1: Because I want to get a job.

Usually said while channelling the best of their “captain obvious” tones

This may be news to many people (although probably not to you if you’ve read our work for more than a few days) but resumes don’t get you jobs.

It is the rare event that occurs if you send in a resume and miraculously the hiring manager calls you up and says “you know, I took a look at your resume, and I think I’d like to offer you the job. We had a lot of other resumes who had more experience but the pink font on the front of yours spoke to me and I knew that you were obviously the right candidate. Can we offer you a signing bonus too?”

Ok. Even if that did happen it’s probably not for a company that you really want to work for. In fact to be quite honest I have seen that happen twice in my lifetime after witnessing many thousands of job offers. Both came from very sketchy companies that upon closer research appeared to not really value their people.

Instead the companies that really truly do value people resumes matter even less at many of those. I’ll address that in a bit.

Common Answer 2: Because companies require Resumes on their applications

You should probably sit down before I tell you this.

We’ve helped well over a thousand people get job offers that they were super excited about and they didn’t have to submit a resume or an application to get that first meeting or interview.

Instead their first interaction had nothing to do with a resume and didn’t happen because of a resume.

A bunch of those people even went on to get a job offer without a resume exchanged. Or if they did fill out a resume or application it was more just a formality for record keeping.

In fact I remember one time where I got a call from my new soon-to-be boss for a job offer. Two days later hours later an email arrives from my boss’s assistant asking if I could complete an application and send it back along with a copy of my resume.

Was this a fluke? maybe it was just a small company that doesn’t have all the procedures and best practices?

Nope. It was a Fortune 500 company with lots of policies and procedures. My boss turned out to be one of the best leaders I’d ever had the pleasure of working with. Have I encountered this situation where a resume is not a necessity since then. Yes absolutely many times over!

So why then do we think that updating our resume is the first and most important thing to do, whenever we want to make a career change?

Why do we think we must have a resume?

The single biggest reason it’s that it’s the most tangible, visible, concrete next step that we are aware of when we decide we need to change jobs, careers, or roles.

It’s something that if you go through normal channels ie. traditional online job applications and conventional interviews more often than not they will ask for a resume.

There’s one problem with this, these “normal” channels lead to “normal” jobs at “normal” organizations.

Unfortunately “normal” statistically is someone who

If normal is someone who really isn’t that excited about their job, doesn’t make very much money and quite frankly just doesn’t have a lot of meaning in the place they spend the majority of their time, I definitely don’t want a normal job!

Think about it. Unconventional opportunities happen through unconventional methods. Seems obvious after you say it.

This of course means that you may not necessarily need a resume or that filling out applications may not be the most effective approach for you. Especially if your end goal is meaningful work that fits you and pays well.

So we’ve put together a list of questions that you can ask yourself to determine whether or not you actually need a resume or not.

We’ve also put together questions to help you decide whether or not you should do your resume yourself or have it done for you (if you need a resume at all) Both sets are below!

What are the “right questions” to ask about resumes?

Is a resume the most effective way for you to career change?

It's not always easy to know. To make it easier we've put together an interactive mini guide

take 2 minutes to answer the questions and you'll know whether a resume will benefit you (and we'll give you some resources to help you out!)