Is this all there is? 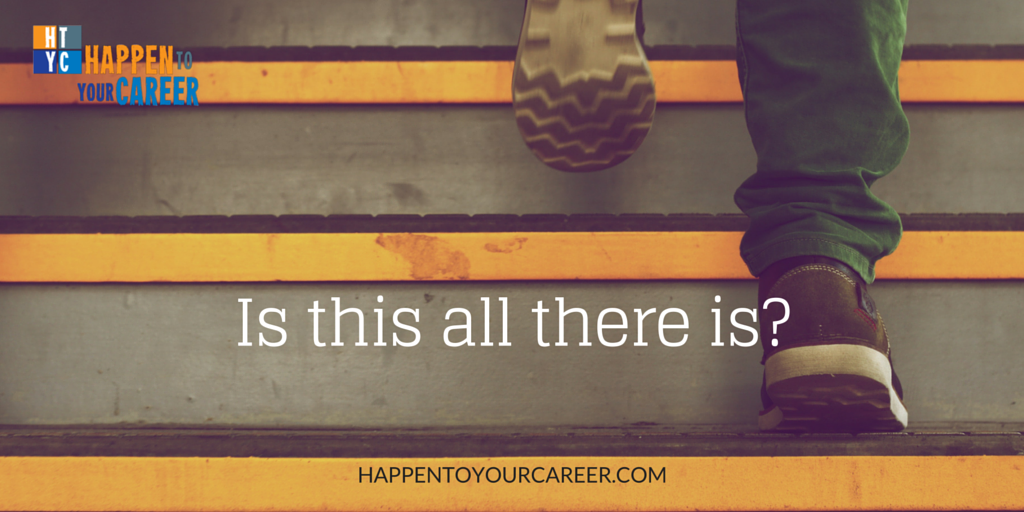 Enroll in our FREE 8-day ‘Figure it Out’ course to find the work that fits YOU!

There used to be a security guard where I would work.

Every day I would come into work and he would say things like, “Guess what? It's Hump day” or “Only 4 more days until Friday!”

He was an extremely jovial guy.

I mean occasionally he would drop some F bombs at the delivery trucks when they would pull in the wrong direction but for the most part my co-workers all would have described him as a happy guy.

He hated his job.

This was very clear to me but I don't think it was to anybody else. I mean, why couldn't anybody else see this?

Ok seriously it had to be hard to miss, the guy measured time in how many hours there was until he could go home!

For the longest time, I didn't really understand why nobody realized it.

I really didn't get how people could miss that he hated his job, At first I thought it was because he did everything with a smile on his face… or maybe it was because he talked to everyone and everybody liked him.

I am so naive sometimes! I don't know how I missed it.

If you don't already know, don't worry I tell you in just a minute… but first!

My HR jobs were the first time that work didn't feel like work! there were plenty of times where I would put in long hours and everything but mostly it just was easy and natural to me… two of them I definitely considered to be my dream jobs at the time.

Oh… they also paid really well and I had lots of opportunities for advancement if I wanted it.

So now you're like, “OK then… why would you leave?”

They won't let me run up the stairs.

(At this point you are probably like, “OK who is this weird guy?  Who really even wants to run up the stairs anyways?”)

When I was about 7 years old, I was just like any other 7 year-old kid!

I ran just about every where I went.

I would slide around corners, trip on all sorts of things, get up and continue running into the next room.

I noticed something funny though – adults didn't do this.

Especially going up stairs, I mean sometimes I would see adults run on the street sometimes even other places…

…but never up the stairs

I didn't understand it, In my 7 year-old mind, I was like, “Why WOULDN'T people run up the stairs?  It's fun, it's exercise!”

I decided that I would run up stairs every opportunity I got!

To this day I still do that.

Well, I do most times (Have you tried running up stairs carrying luggage?) and I get a lot of funny looks when it's in public. But it just reminds me to not care about what other people think.

I'm having fun and they're all worried about what everybody else should do or what people might think.

Only recently have I realized that there are two separate worlds.

One world of people who are very worried about what you “should do” and another completely different world of those who refuse to give the joy in their lives away in exchange for what others might think.

I recently heard some of the most useful advice I have ever heard from Mike Rowe (that's right, the
“Dirty Jobs” guy!)

“Happiness doesn't come from a job. Happiness comes from knowing what you value and then behaving in a way that's consistent with those beliefs.”

That's what most people miss.

You have to figure out what you want and what is important to you to be happy then you need to do work that aligns with that.

I can't do HR work forever because companies don't like it when HR guys sprint full speed up the stairs. (Something about it setting a terrible example for safety or whatever…)

I value being able to keep that promise to myself to never fully lose that spirit, hope, and (most of all) the fun that children can have in everything they do.

Which means I have to do work that allows me to have that. So… that's one of the many reasons why I here writing to you right now!

Did you figure out what was going on with my coworkers? How come they didn't realize that Randall hated his job. How come it wasn't obvious to them like it wasn't to me?

It was normal behavior to them.

They aren't all that happy either.

It's not that they're bad people or even necessarily that they're in the wrong jobs for them, they just don't know what they want.

More importantly they all think that that's just the way it is, that life doesn't get any better than this.

You just go through until “Hump Day” and then there's only two more days left in the week!

It's not their fault.  It really isn't.  They just don't know a better way. They don't know that there is a world where “Hump Day” doesn't exist. It's not necessarily easier in this world, but it's definitely worth it.

It's a little like in the Matrix where Keanu Reeves is given a choice to take the red pill or the blue pill by Morpheus.

The best and worst part is that once you take the red pill, you can never go back and you won't ever be able to look at work the same way again.

What's making it so hard for you to find your calling right now?  Leave us a note in the comments!